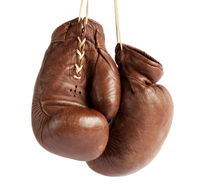 A copyright infringement case involving Raging Bull that has wound its way through the courts recently took "center ring" at the U.S. Supreme Court. In the case, Petrella v. Metro-Goldwyn Mayer, Inc., the Court considered the question of whether the doctrine of laches is available as a defense to copyright infringement. On May 19, 2014, Justice Ginsberg issued a 6-3 opinion holding that laches is not a defense to a claim for copyright damages. Justices Breyer, Roberts and Kennedy dissented.

After Lamotta hung up his gloves, he worked with Frank Petrella (the plaintiff's father) to write a book about his life that the movie was based on. Paula Petrella became the owner of the copyright in her father's work following his death in 1991. In 1998, Petrella put MGM on notice of her allegation that the Raging Bull film was infringing her copyright. She took no further action, however, until 2009 when she sued MGM for copyright infringement, seeking damages for the three years prior to the date the suit was filed (the Copyright Act has a three year statute of limitations). The U.S. District Court for the Central District of California dismissed the claim and the U.S. Court of Appeals for the Ninth Circuit affirmed, ruling that the plaintiff's claim was barred by the doctrine of laches (which is an equitable defense that can bar unreasonably delayed lawsuits).

The Supreme Court reversed the lower courts, holding that since the Copyright Act contains an express three year statute of limitations, laches cannot be used as a defense to a claim for copyright infringement damages. The decision allows for the possibility that laches may be available as a bar to equitable relief in extraordinary circumstances.

The Court dismissed the import of the nine-year delay from the time the plaintiff put MGM on notice of the claim for copyright infringement to the date she brought suit, noting "[i]t is hardly incumbent on copyright owners, however, to challenge each and every actionable infringement. And there is nothing untoward about waiting to see whether an infringer's exploitation undercuts the value of the copyrighted work, has no effect on the original work, or even complements it."

As to next steps in the case, the Court remanded the litigation "for further proceedings consistent with this opinion," meaning that the plaintiff can now make its case in the district court and seek damages dating back to 2006, three years prior to the lawsuit filing date.

There are several implications of the case that are important to litigants and attorneys, not just in copyright infringement cases, but in litigation more broadly.

The Raging Bull decision is good news for plaintiffs whose claims may otherwise have been barred by the doctrine of laches. It will be interesting to see how courts apply the ruling and its caveats in copyright and other cases moving forward.